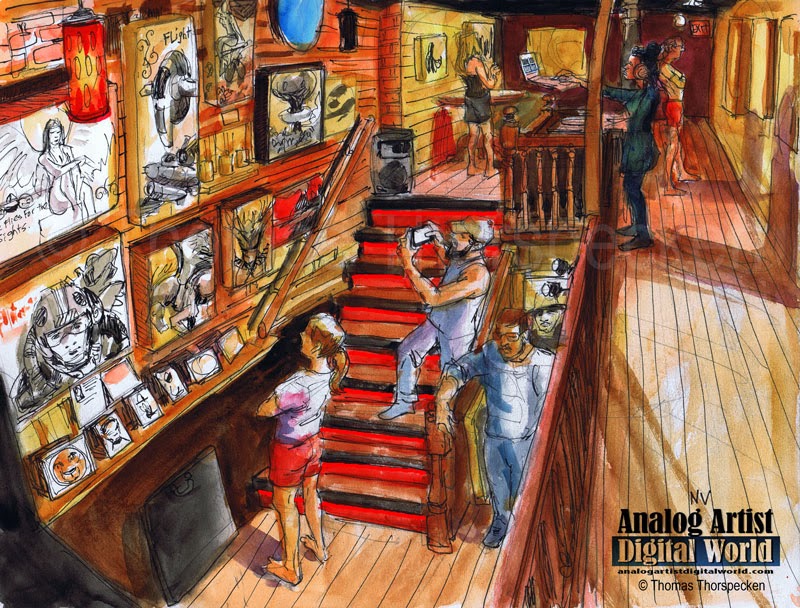 On Third Thursday, September 19th, I went to NV  to see the art opening for G. Lemus. Tr3 Mark Harris curates the shows at NV along with Brad Michael Biggs. The bar is gritty with a fantastic exposed wooden slat wall. G. Lemus came from Honduras and making art helped him adapt to a new culture where he didn't know the language. In the military his comic sketches of the Drill Sargent were confiscated but he became the official platoon artist. He founded the B-side artists in Orlando with Swamburger. This group of artist were the first to bring art to the clubs and bars in Orlando.

G. Lemus was inspired by the expressive work of Jean-Michel Basquait.  The work in this show featured thick rich paint. Many of the pieces were primarily black and white featuring images of aircraft and flight. In one painting titled "On the Trail of Greatness", Luke Skywalker seemed to be flying a modern day jet instead of an X wing fighter. Another painting of a nautilus shaped craft was titled "Victory over Love is Flight". The artist wore goggles as he moved around the opening talking to patrons. He was offered a mural assignment in which he would supervise middle school and high school kids to do the painting.

The artist hired beautiful women to pose as flight  attendants. The whole idea of the show was based around flight. Take you dreams and let them sore. The artist was the pilot and the girls were the flight attendants passing out a menu (his art) with peanuts attached to it. The DJ brought her own equipment and set up at her station at the top of the staircase.

Tr3 and I were discussing a showing of my sketches at NV. Rumors circulated that evening about the possible show and it was quickly established through a quick series of texts, that the planned dates of the NV show were too close to the dates of a solo show still in the early planning stages at The Gallery at Avalon Island. Other than showing my work in a U-Haul (Mobile Art Show), this was my first experience in planning to show my work downtown.  There seem to be unwritten codes of conduct that I overlooked. I'm hoping to have my work on some walls when my book on Urban Sketching comes out in early 2014.

Mark your Calendar, The G. Lemus show at NV (27 E Pine St  Orlando, FL) can be seen anytime before  Sunday October 13th at 2am. Grab a drink and see some art.